This is Mt. Rubidoux Peace Tower 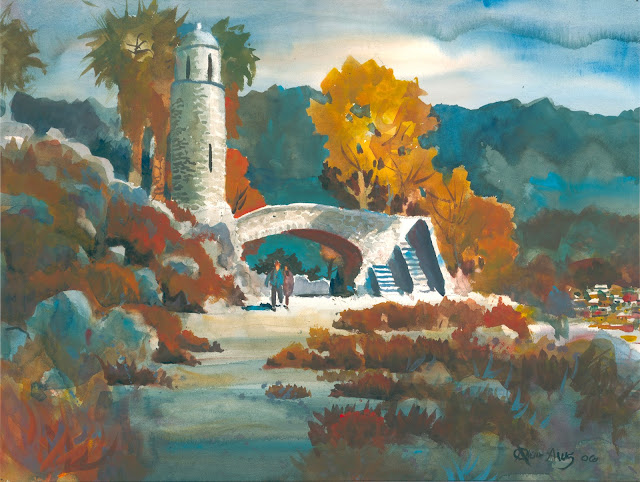 We go back to Riverside for this entry with a special look at a very special landmark,  Mt.  Rubidoux Peace Tower. This is Mt. Rubidoux Peace Tower You can see this print directly on our online store at http://www.dononeill.com/peace-tower/ Don painted this watercolor in 2006, shortly before his passing in 2007, as one of a series of Peace Tower paintings. It is one of the final works of his career, making it a very special painting. This particular work contrasts the cool background and sky with the warm hues of the foliage and sunlight falling on the bridge.  If you ever get the opportunity to browse around private collections you may see some of Don's other versions of Peace Tower with nearly identical composition but the drastically different color palette and hue.   Don took a few artistic liberties with this piece such as making the road appear more natural when in reality it was paved in the early 1900s with some of the earlies
Post a Comment
Read more 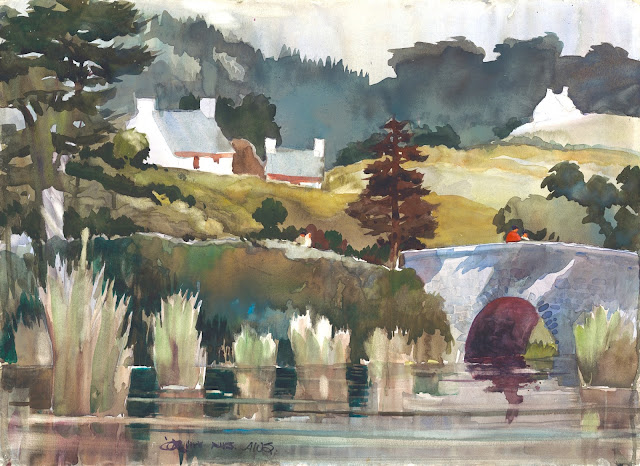 While the bulk of Don's paintings depicted California, his home for the last 46 years of his life,  he made a point to travel all over the world and produce paintings of scenes which interested him.  This particular painting is rather special as it is both a scene of a far away land and a painting represents a scene from Don's heritage.  This is Irish Countryside You can see this print directly on our online store at http://www.dononeill.com/irish-countryside/ Don traveled all over the world during his career,  Ireland had a special place in his heart as it was the home of his grandfather, a man who actually passed away over 15 years before Don was born.   He was visiting Ireland in his late 70s looking for information of his family history and specifically was trying to track down the birth records of his grandfather.   This painting is fairly special in contrast to the life Don lived, this painting told the story of his heritage. U
Post a Comment
Read more

This is the Skier 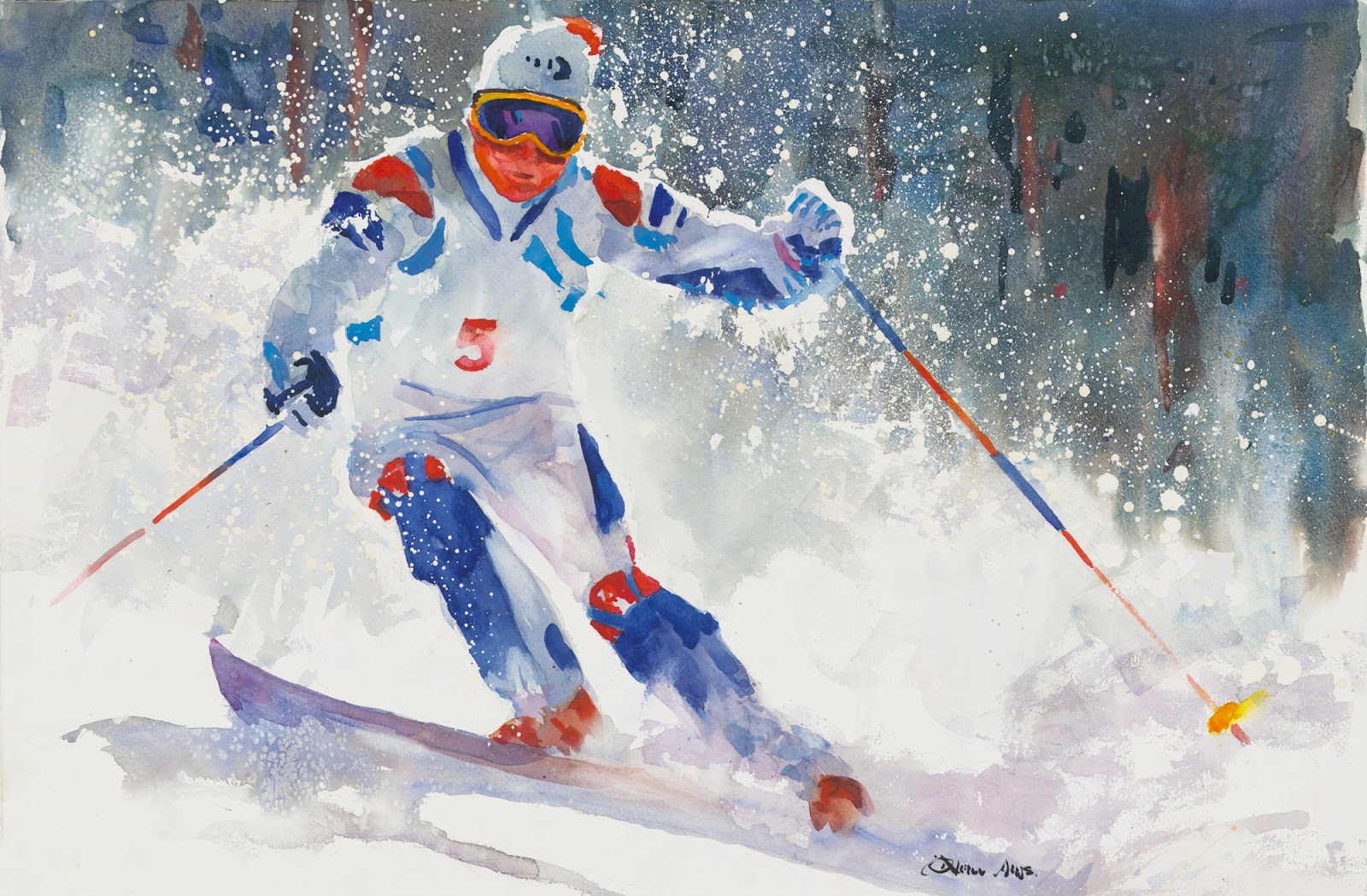 My grandfather was predominately known as a landscape painter.  Most of his fans are familiar with the various Mission Inn and other architectural scenes he painted throughout his career.  It is not unheard of for artists of this caliber to dabble in the occasional figurative work.  However, in the 1990's,  Don took on an incredible challenge, he went beyond figure work and painted action filled sports scenes.   As our mountains of California are full of snow I could not find a better time to showcase this wonderful painting. This is The Skier A professional skier, racing down a mountain with a trail of white powder snow behind him.  You can feel the raw action and movement in this painting.  A massive contrast from the usual calm and relaxing feeling that my grandfather's paintings bring out.   There is a lot going on with this painting so let me tell you a bit that I know about the back story. When I first started taking watercolor
Post a Comment
Read more 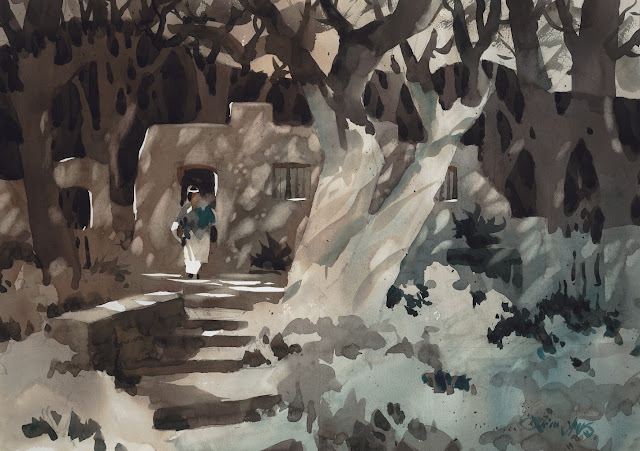 My grandfather traveled all over the world and in some instances spent a great deal of time looking for painting destinations,  teaching classes and participating in collaborations with his mentors.  One of my life's missions is to share his paintings with the world and tell the story behind them.   Over the last decade of his career he produced several paintings featuring scenes of the American Southwest.   Today I am going to share one of our favorites from New Mexico.  This is Adobe Steps When I first saw this painting I was convinced it was either Santa Fe or Taos as both places are full of this beautiful traditional adobe architecture.  However upon further research we learned Don conducted a painting workshop in the small community of La Luz, New Mexico where we think the source material for this scene would have originated.   This particular piece was featured as the cover on Don's final piece, a retrospective book "Don O'
Post a Comment
Read more 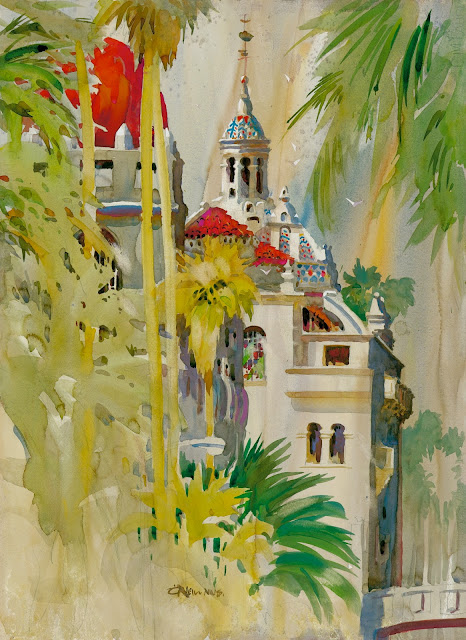 This is going to be the start of a series where I take you on the adventure of my grandfather's artwork.  Don O'Neill, my grandfather painted over 3500 paintings throughout his career spanning from the 1970s to his passing in 2007.    I took over his business after his passing and I am proud to produce over 100 different giclee prints of his work.  Every few weeks I will share a different piece and tell the story, at least the story as far as I know it.   Every painting is in a story of itself and I hope to share what I know to you.   This first post is going to depict perhaps his most popular painting. This is Mission Inn Towers.   Don painted Riverside's Mission Inn numerous times over his career.  This painting however is perhaps his most famous.  Don painted this beautiful watercolor painting in the late 1980s.  This image of the Mission Inn as painted, had to be planned beginning with a high and very long distant view so as to place each dome in the positio
Read more